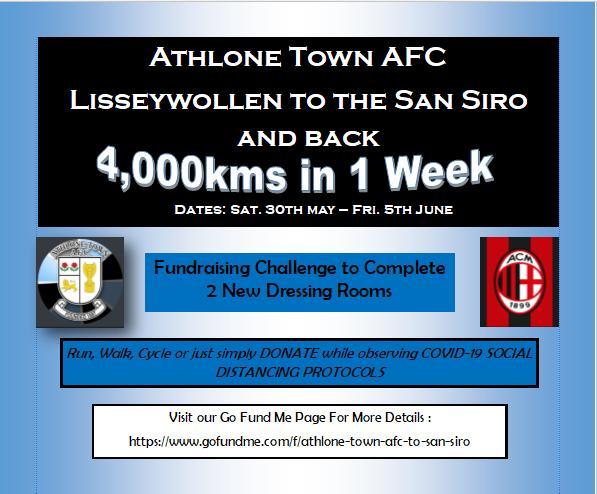 ****Lisseywollen to The San Siro and back Fundraiser****

The Club, over the last few years, has grown to the point where we now field eight teams(7 at National League Level and 1 in the Midlandschoolboysgirls League) and these teams along with other clubs also using the Stadium means that we need to improve and update the facilities particularly the dressing rooms.
Two additional dressing rooms were constructed by volunteers and we now need to get these finished and ready for the return of football and to that end we are having this fundraiser.

We are looking to retrace the footsteps of the great 1975 team by virtually returning to the San Siro Stadium in Milan and by doing so we hope to raise funds to finalise our second set of dressing rooms.

The event will take place over a week, from Saturday 30-May to Friday 05-Jun where we will look to cover the distance to the San Siro Stadium and back; approximately 4,000kms. We are asking that you complete a walk, run, cycle or simply donate to upgrade our facilities in Athlone Town Stadium.

You can let us know through the GoFundMe page what distance you have covered or can send the distance on to our Facebook page. We encourage everyone to wear the blue & black when doing the activity and share to Social Media and tag the official Athlone Town AFC page.

The GoFundMe page is at https://www.gofundme.com/f/athlone-town-afc-to-san-siro