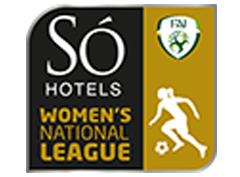 We want to say a big thank to Michael O'Connor who has been the driving force behind the expansion of ladies football at the club and indeed the expansion of the Academy in general and it is thanks to his commitment that we are able to celebrate this terrific news today.

We will be holding trials for our Senior Women's and U17 Só Hotels National League teams on Friday 29th November in The Athlone Town Stadium. All players are asked to attend at 7pm for registration and please note that for the U17 trial players must be born in 2003 or 2004