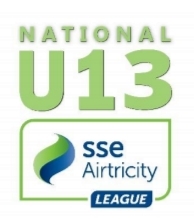 What a team !! What a game !! The U13's overcame Finn Harps Football Club Official today in the Semi-Final of the U13 SSE Airtricity League Shield Cup in some style when they ran out 3 - 1 winners thanks to a Conor Bracken hat-trick.

Both sides were well up for the game and it started off at a frantic pace with each team pushing hard for the opener but as the game settled down Athlone started to take control and brought the game to Harps and at one stage forced four corners in a row with the Harps net leading a charmed existence as the lads couldn't find a way past the stout defence. However it only takes one lapse in concentration and as the Harps defence played the ball across the back Conor Bracken raced in to catch the keeper in possession and took the ball around him and hit the back of the net for the first of his hat-trick.
The second wasn't long in coming as Brandon Wykes skipped around his marker and from the edge of the box, with a pin point cross, picked out Conor on the edge of the six yard area and he nodded it home over the head of the despairing keeper to make it 2 - 0. Despite several more chances for both sides the score remained the same when the ref blew for half time.
Predictably Harps came out after the break all guns blazing in search of a goal in order to get themselves back into the game but they got caught on the break when Conor received an accurate pass in the centre of the park, took it around his marker and chipped the keeper from outside the box to make it 3 - 0 to the Town and complete his hat-trick.
Harps continued to press hard but, with the Athlone defence remaining solid and Szymon in the Athlone goal dealing with anything that got through, they were finding it tough and the Athlone midfield and forwards continued to cause them plenty of problems at the other end. However the pressure did pay off with about ten minutes to go as the Harps pulled one back when a shot from the edge of the crowded box sneaked in at the near post just past Szymon's outstretched arm.
Both sides continued to press each other for the last ten minutes but with no further goals it was the Athlone lads who were celebrating at the final whistle and we now have a Final to look forward to.
Details of the final will be decided during the week but we will be facing Waterford FC who today won their semi-final against Cabinteely 2-1